It hasn't been an easy rollout, but Apple have released a promising set of features to help podcasters get paid for their work... if only within Apple's ecosystem 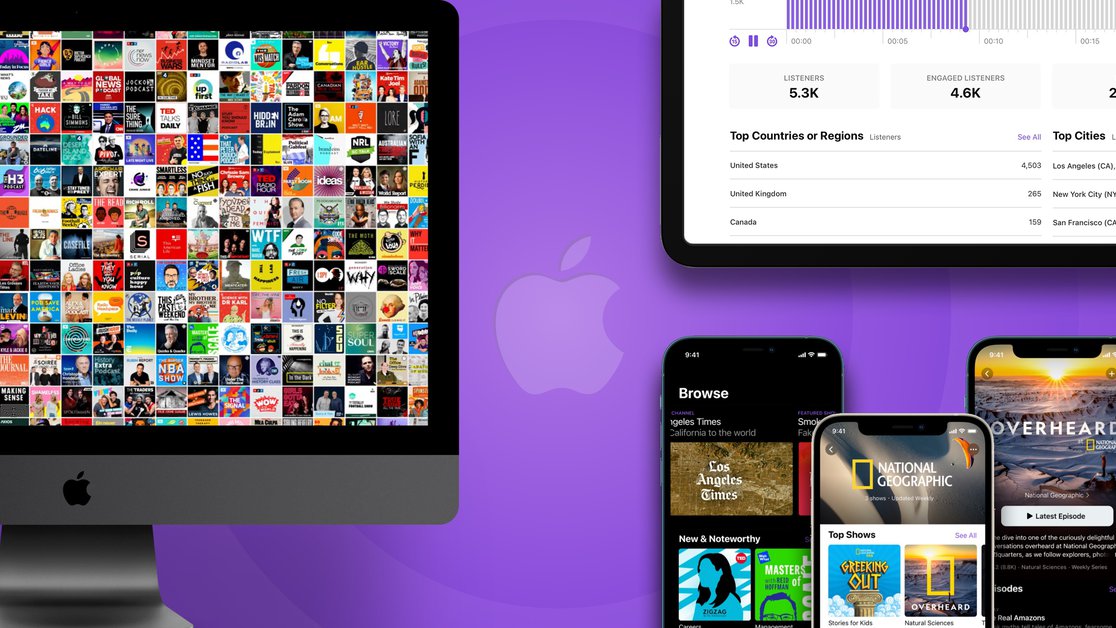 At yesterday’s Spring Loaded event, the company announced a bunch of new tech, initiatives, and software releases. But the biggest news for us was delivered right up top by CEO Tim Cook.

“In the words of Princess Kate after we came back from our shopping trip in Ibiza, ‘There’s a lot to unpack here.’” – Tahani Al-Jamil

Here’s what we know so far, in brief: 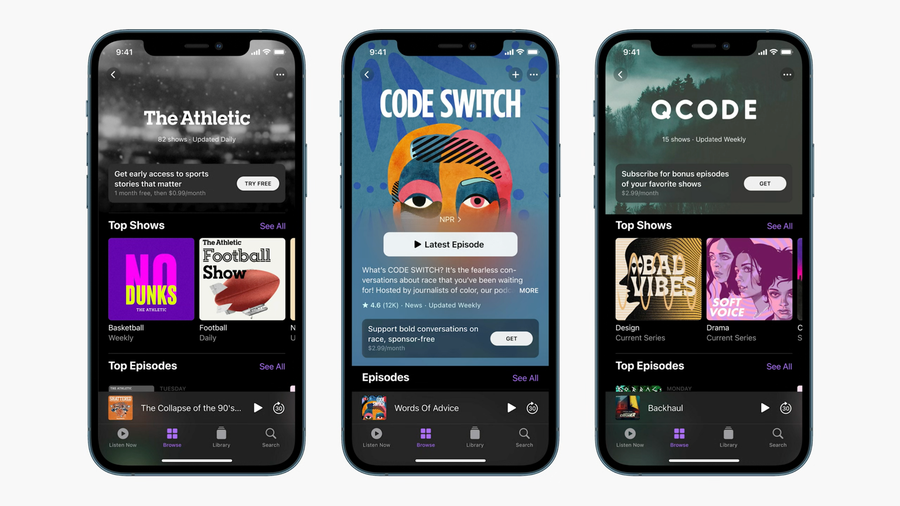 In Issue #1, I wrote about how Apple were transitioning their call-to-action from “subscribe” to “follow”. There was lots of speculation, but now we know for sure, that Apple are enabling listeners to pay for freemium or premium content, directly from the Apple Podcasts app.

Some of us had worried they might have been working on a Luminary equivalent – yet another “Netflix for podcasts” – which would’ve given indies a raw deal, but what Apple announced yesterday is better for creators (to an extent), and great for listeners using Apple Podcasts.

Here’s what you need to know:

This news gives me cautious optimism as my views on RSS and podcasting evolve. I worry for developers of third-party podcast clients – and their users – since there’s currently no way for apps like Overcast and Castro to offer paid subscriptions using Apple’s model. However, that doesn’t mean the company won’t eventually open this up to trusted developers. It’s unlikely though.

So I think this means that Apple Podcasts Subscriptions will form “part of this complete breakfast” for podcast creators, who’ll need to make their content available through a number of means and a plethora of platforms. (As I briefly mentioned above, Facebook is getting into this, and you know Spotify are going to want a taste, although their current business model makes this tricky to predict.)

I understand privacy is part of Apple’s positioning, but I wonder how appealing a paid subscription option is if you don’t have any direct way of communicating with those listeners. It makes the relationship more stark and transactional which is fine for big production companies who aren’t really that invested in listener relationships, but Apple are overlooking indie creators who do it for authentic connections, and to build a loyal fan base.

In the short term, indie podcasters stand to gain a little from the frictionless nature of Apple Podcasts Subscriptions, and more so if the company does extend their reach across Android and Windows… although I wonder how much traction they’ll pick up from Android users, who can get as intrenched as Apple users. Windows users will probably just be glad of the attention. 😘

Ultimately, this is not for dyed-in-the-wool podcast listeners, or the creators who market to them. This is for the mass market, so I think the NPRs and the Luminarys stand to gain more from this than indies do. However, this should not be ignored, and I think we all gain from the normalisation of paying to support podcasters. So in summary, I’m positive. 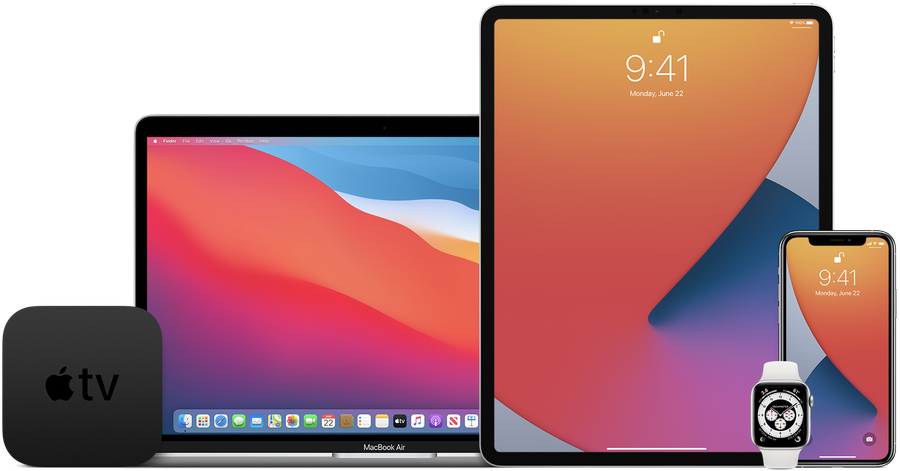 Starting in early May, channels and subscriptions will be available to anyone in the Apple Beta Software Program. This means they’ll be able to view published shows, purchase subscriptions, and listen to subscriber audio.

While I want to see more podcast apps offer this, I’d rather see the data come from a central repository. It’s not in Apple’s interest – nor in the interests of any app developer – to make that data available through an open API, so it would fall on a company like Podchaser to provide it, but I think Apple still feels like they’re the apex predator here, so won’t look to collaborate.

This means lots more copying-and-pasting to come. But it’ll be worth it for those who want to maximise discoverability across their network, and create a consistent brand voice. 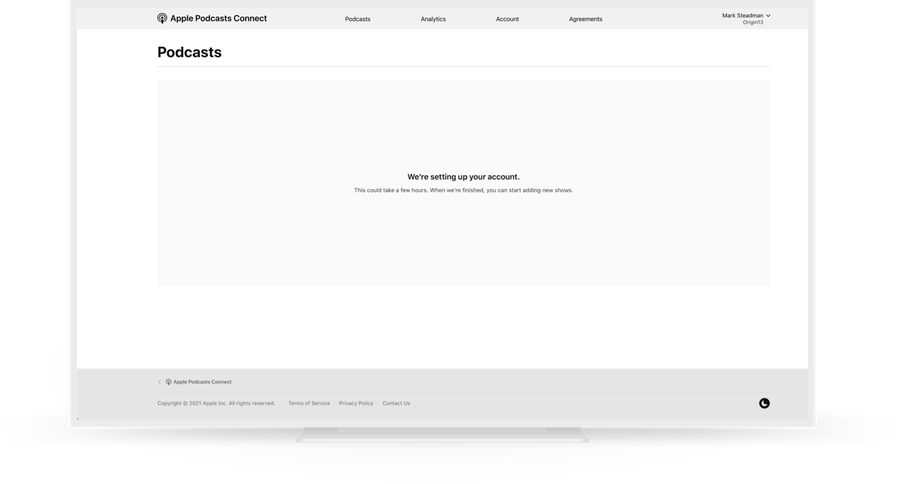 Podcasts Connect and the iTunes API. Here be dragons.

Given all these lovely goodies and the promise of new revenue streams from the floods of people who’ll find our shows once iOS 14.5 drops, you might be thinking now’s a good time to get your Apple Podcasts account in order.

Firstly, if someone else manages your Apple Podcasts listing (for example, Podiant customers on the Professional plan get that taken care of), make sure they’re aware of the upcoming changes. They may already have got an email from Apple, but consider forwarding this email on to them.

Now, when you login to Podcasts Connect, you’ll be asked to create a new type of account, either a personal or a business one. Rumblings on Twitter seem to suggest you might get different results based on the option you pick… right now I’m not sure, but I opted for Business (this is for my own podcasts and those I manage for production clients, not those that are submitted through Podiant’s dashboard… I’m deliberately not touching that account until the dust has settled).

For reasons as yet unclear, when you setup your new account, you end up losing access to your dashboard for a number of hours. In James Cridland‘s case, it was eight! While Apple are “setting up your account”, you’ll be unable to manage any of your podcasts, or submit new feeds.

But podcasters have good reason to want to login and check their status, given the news today that Apple’s iTunes Store API is hiding the RSS feed URL of many podcasts. Apparently there’s a box you can tick that brings this back for your show (and you do want to tick it), but unless you only have one podcast in your account, I would hold off for a few days.

So, what does this iTunes Store API thing mean?

An API is a way that programmers can get data out of a system, or put data into a system. Third-party podcast apps have long used Apple’s iTunes Store API to get podcast info, so when you search for a podcast in Overcast, you’re actually searching Apple’s database.

Traditionally, podcasting works by subscribing to an RSS feed, which links to your most recent episodes. So when you search for a show in Overcast, Marco (the developer) reads the RSS feed URL from Apple’s API and is able to show an “Add” button, so new episodes get delivered to your phone.

Trouble is, yesterday Apple removed the RSS feed URL from its API, so many many podcasts can no longer be subscribed to, in apps using Apple’s API, but not made by Apple (apps like Overcast, Downcast, and more). Some apps maintain their own directories, and some edge-case apps use the Podcast Index, but we might see legit apps using that soon if Apple doesn’t correct this.

It looks as though this might be intended, since there’s now a new tickbox in Podcasts Connect which – when you’re finally able to get to it – opts you in to the directory. That means if you want your podcast to appear in Overcast, Castro and other apps, just like it used to, you now have to take an extra step you never had to before.

I still think it’s worth waiting though, as Apple have been typically uncommunicative about this, and we don’t know if this is a mistake. Often things that look sinister and underhand are just down to human error, so unless you’re Marco Arment, it’s probably not worth panicking just yet.

I think there’s cause for positivity here between paid subscriptions and more options for branding and metadata like guest and host bios, and once the dust settles, hopefully we’ll breathe a sigh of relief. If we do find out that – on purpose or by accident – Apple have knee-capped third-party podcast app developers even further by opting all podcasts out of their open directory, that’s going to be a shame, and a severe mark against the company who have up until now been good – if largely inattentive – stewards.

I know that was a lot to take in, but I think it’s useful stuff to know about. I don’t know how vital Apple Podcasts is to the larger indie podcasting ecosystem, as creators often have limited resources and so can only put promo effort into one or two channels, but so often, where Apple leads, others follow.