Spotify have entered the ring only a few days after Apple announced they'd be letting app users sign up to paywalled podcast content. 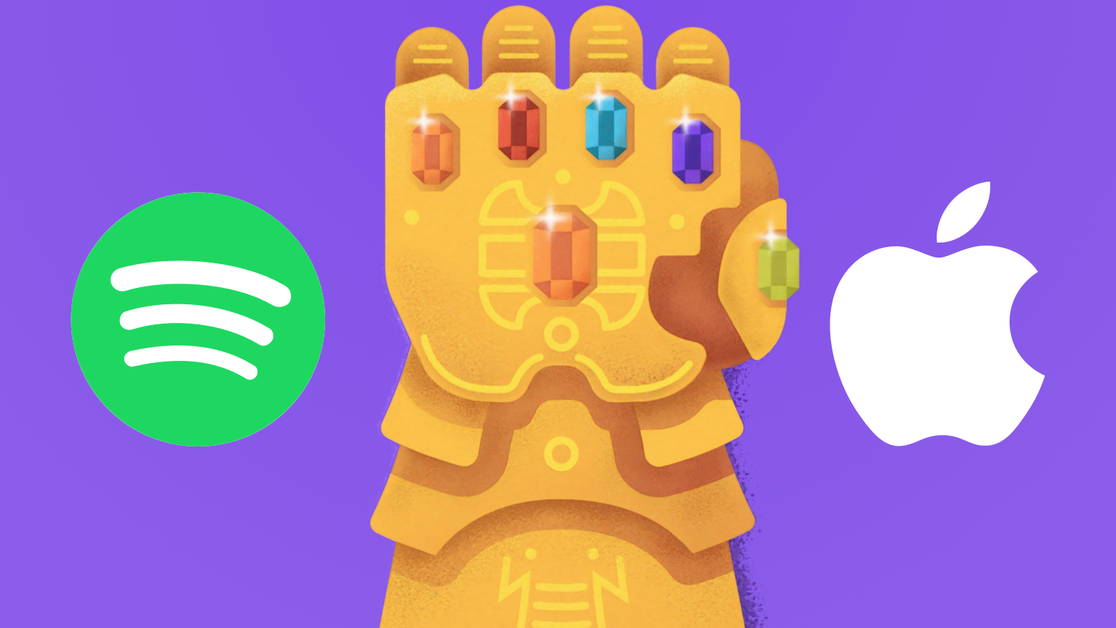 Right now, Spotify and Apple are like two best men at a wedding, fighting over the mic to crack the killer joke at the reception dinner. This week, Spotify managed to wrestle the mic away from Apple, who after performing a blinding set last week, seem to have tripped over their own shirt tails and fallen head first into the cake.

OK, metaphor aside, you get it. Spotify want podcasters’ attention this week, and with good reason. Let’s look at their two biggest announcements: paid subscriptions and their integration into the Facebook app.

Spotify today announced their new paid subscription service, powered by Anchor. It’s currently only available in the US, but will be released to the world in the next few months.

The service is powered by Anchor, but it’s unclear whether you’ll be able to run your podcast through a proper hosting provider and just use Anchor to make Spotify’s subscription system work, or if you have to move your entire show to Anchor.

On a personal note, Anchor have done little to gain my trust or respect as a platform, so that’s why I’m salty about them, and wouldn’t want to see podcasters locked in to a service that’s only redeeming feature is its $0 price tag. It’s just not a good platform, that’s all.

That aside, from the horse’s mouth:

This feature will be available to creators through Anchor, allowing podcasters to mark episodes as subscriber-only and publish them to Spotify and other podcast-listening platforms. For the next two years, this program will come at no cost to the creator, meaning that participating creators receive 100% of their subscriber revenues…

Spotify win hearts and minds by waiving any kind of fee for the first two years… and deservedly so. After those first two years, they reckon they’ll only take a 5% cut, which is a mighty slap across Apple’s chops. Advantage: Spotify.

Furthermore, because Anchor is a podcast host, it can make its feeds and content available outside of Spotify. Whammy. (Honestly, I think this one almost can’t be overstated. Apple’s subscription service requires lock-in, and can only be used by people who like Apple stuff, whereas ostensibly you can pay for a podcast and listen to it in your favourite app… which as all podcast fans know, isn’t Spotify.)

This does give me pause to wonder whether Apple will retaliate, and do damage to the industry as a result. We already know that Apple and Spotify don’t get along, but Anchor has a special closed-door agreement with Apple which is why it’s allowed to pollute its directory with the millions of people shouting “test”. into their iPhones and hitting Publish.

And, as Apple chases more services revenue at the expense of goodwill (especially in the developer community), could we see them kneecapping apps like Overcast that point to Anchor feeds that encourage subscriptions? (Apple don’t permit apps to sell digital goods and services unless using their payment gateway, which Spotify absolutely will not be doing). Honestly, I doubt we’ll see anything like this, but I wouldn’t rule it out.

The only special sauce in this announcement is that Spotify are integrating payment into their app, from Anchor feeds. So to flip my frown upside down, there’s nothing to suggest they couldn’t open that up to respected hosting providers too. Or even independents.

I’m intrigued to see what this will mean in the coming months. NPR are jumping aboard but I don’t see them moving their content over to Anchor, so I’ll be interested to see how this pans out.

OK, onto the next headline.

Spotify users can now share music and podcast episodes from the Spotify app to their Facebook timeline. When listeners tap on a track or an episode, they’ll no longer be taken away from the Facebook app, but be presented with a miniplayer at the bottom of the screen. It’s another way to keep Facebook inside their walled garden, but a blessedly simpler way for podcasters to share their work. For more details, over to James Cridland at Podnews.

I honestly don’t know how useful this will be for podcasts. I think audiograms have a much better chance of hooking listeners in, as podcast episodes typically need a ramp up before they get to the juicy content. Plus, may newbie podcasters struggle with long, languid openings with music that’s too long or loud, or unnecessary pre-roll ads.

However, it forms part of what would seem to be a wider audio strategy for Facebook, that includes an Anchor-like audio creation tool 🥱, an audiogram-like system – which sounds great but won’t be standards-compliant, so again I say 🥱 – and a Clubhouse competitor, because that’s what we need apparently.

Sorry, you know that snark is my love language. As I wrote last week, I’m pleased to see Facebook realise that audio is a medium deserving of its place in the social graph. They’ll stumble a bit at the beginning as they’ll likely confuse audio and video, not realising that audio sharing is a very different beast, and that audio doesn’t go viral at super-light-speed like video can. But any ways in which Facebook and other apps make it easier for listeners to discover and check out new shows, and for those unaccustomed to podcasts to feel like they’re able to listen, the better we’ll all do.

I really do think that last point is important, here. I still speak to people who feel like podcasts are some sort of technical thing they won’t understand. For them, as much as we might bitch and moan, Facebook is the Internet, so if we can bring our work to their ears, we increase our chances of touching their lives. We don’t have to convert them into podcast fanatics; we just have to get them hooked on the awesome content we’re making for them and others like them.

That gets me excited. I hope it does for you too.