However much you love your podcast, you're a busy person and you've got stuff to do. Here are my takeaways from Podcast Movement, so you can get on with your day. 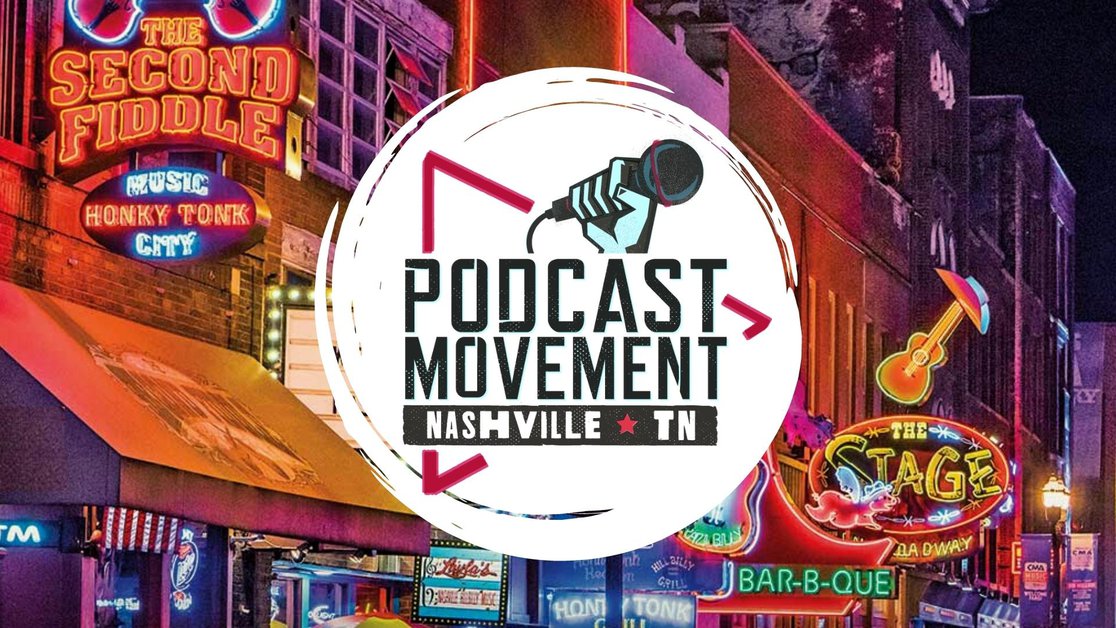 There were several reasons I wasn’t going to attend Podcast Movement in person this year. I’d actually promised myself in 2019 that I was going to make it in 2020, but then the world had other plans, and with my career transition, the cost of air travel and y’know, everything, I was only ever going to be able to attend virtually. But that doesn’t mean I can’t bring you the most useful takeaways from the conference floor, and introduce you to some of the fine people I met. Instead of going through it day-by-day, here’s what I’ve synthesised from the talks and panels I attended. First off, let’s get the elephant out of the way.

There was a little chum in the chatroom water running alongside the presentation by the founder of social audio app “Fireside” and its big name investor, who’s on the American version of Dragon’s Den. (I’m using quotes around “Fireside” to distinguish it from the legit platform of the same name). Key takeaways:

In the opening keynote, Kate Erickson, producer at the wildly successful Entrepreneurs on Fire podcast, shared the show’s 10-step success workflow, and had this to say on the topic of podcast editing which I think is pertinent to anyone who doesn’t already edit their own voice:

I think it’s such an important part of your podcasting journey because it allows you to see and hear firsthand your biggest points of improvement. I’ve edited every single one of my episodes… because it’s always an opportunity for us to learn how we could be better. I was terrible with my ums and uhs in the beginning, but because I listened back and edited every single one of my episodes, I was able to quickly improve in areas that were very obvious to me weren’t my strong points at the time.

Tom Webster of Edison Research suggested you pick one of your episodes, get “an ugly uncorrected transcript”, read it and “experience true horror”. If you can read and edit your transcript, then edit your next episode to match the pace, you’ll be on your way to mastery. And his answer to the eternal question of “how long should my episode be?” is simple: “Shorter than the last one.”

Rob Walch of Libsyn had some great advice for podcasters thinking about the broad audience who consume shows via Apple Podcasts:

The first 30 seconds are now the most important 30 seconds of your show. That’s because Apple Podcasts is still number one, and that’s what people are being driven to do is click that Latest Episode button.

He’s referring to the change to the Podcasts app earlier in the year that put far greater emphasis on playing the latest episode of your show than on following it (or what we used to call “subscribing to it”). If you want to hear how to handle the first 30 seconds of your show if you have a canned intro, listen to Evo Terra’s Podcast Pontifications.

I always have three words in mind: fun, relatable, and informative. And so I would encourage you if you don’t have three words that describe the experience that you want your listeners to have when they’re checking out your podcast, that you come up with those. And what’s been really helpful for me is when I go and look at the reviews for the show, I see people saying those same three words, which tells me that I’m achieving my mission.

On a panel of veteran podcasters, Joe Saul-Sehy of Stacking Benjamins had some advice for those working in podcasts that drop knowledge (something I’ve heard echoed in the virtual corridors):

Meghan Nesta of Aweber used the Jobs to be Done framework to explore the journey down the marketing funnel from your listener’s initial contact with you through to monetisation, via authentic email automation. Meghan also pointed out how useful email is in combatting the algorithm’s habit of swallowing up good content, and allowing more personalised communication.

Buzzsprout’s Alban Brooke wants us to stop putting headphones, mixers, mics, and other podcast paraphernalia in our podcast art. Preach.

Media research consultant Jay Nachlis asked us to think about finding the ways in which we can change the game rather than trying to beat someone at it, and suggested we need to think clearly about what makes our shows different, “because if you can’t think of distinct points of differentiation between you and the competition, then… how can potential listeners?”

In a panel discussion on leadership, Juleyka Lantigua tackled the problem of the download as a measure of success, and laid out how she sets expectations with new podcast clients:

When I’m talking to potential clients, I say to them “this is how we’re going to measure the success of your show. I want you to be really realistic about what it means, and I’m want you to understand how are we going to position your show so that it is still interesting editorially, but that is still listenable down the line”, because for many of our clients, they’re just sort of like tippy-toeing into podcasting, and so they want a lot of reassurances – I can’t give them reassurances until we make the show, but what I can say is “I will set up realistic measures so that quarter over quarter, you and I will look at our analytics report for your show, and we will understand that there has been measurable growth.”

Like me, Lauren Passell of Tink Media and Podcast the Newsletter is a fan of a podcast promo, and in using dynamic content insertion as a way to make it easier to slot them in and out, and even negotiate on the number of downloads you’ll allow a promo to run in.

I do think that host read ads work the most because your listeners trust you right off the bat, so anything that you say they’re more likely to follow along with.

I also enjoyed this pithy gem, which explains why wort-of-mouth is still our best tool for growth:

Also, if you want to grow your listenership, start by understanding more about them. As discussed on a panel on monetisation, even if your audience is small, you can get good demographic data by asking for it. And in his keynote, Tom Webster gave you pretty much everything you need, as long as you’re willing to do the work to make it into a Google form.

Joe from Stacking Benjamins also had a great “fake it ‘til you make it” take:

Step one was going to be… you can ask a question to the show and you call in – we use SpeakPipe – people can call in and ask a question… Nobody called in. You got to get people used to calling in – nobody wants to ask the first question, but once somebody raises their hand, other people then feel empowered and they will ask questions. It’s horrible to admit this, but we made up people… you’ll hear my sister three different times and she’s Jenny from Minneapolis and then five shows later she’s somebody else. But it worked. At first we were doing that a lot and then we had to do that sporadically. And now we get a stream of questions.

CEO and Founder of DCP Entertainment Chris Colbert had this advice:

In his talk about podcast interviews, Rich was candid about his own struggles with imposter syndrome and the tiny cracks in our self-appreciation that can be exposed in the harsh light of speaking with strangers:

Podcaster and former trauma specialist Dr John Delony summed up the chase that has dominated so many of this week’s conversations:

If you ever answer the question “what are you worth with the number|, you’re answering it wrong.

And if I can be real a second, for just a millisecond, his talk in general has given me some pause for thought about living a more intentional life (it was a good talk), and is encouraging me to help those I work with focus on the quality of their work and how they’re communicating their purpose, rather than the number of people whose phones automatically downloaded an MP3.

Shout out to Wendy Coop of Savvy Brown Girl, Anoop Tiwari of A Walk Within, Suzy Buttress of The Casual Birder, OG podcaster Jim Harold, Two Maverix‘s Dot Cannon, Voiceover and voice coach Nic Redman, Jodi Krangle of the Audio Branding Podcast Michael Unbroken of the Think Unbroken Podcast, event co-organiser Jared Easley, all of whom I met while walking the virtual corridors, where I also bumped into the ever-wonderful Stephanie Fuccio who runs the Simple Podcast Editing podcast among many others, and the aforementioned Evo. Also thanks to Arielle Nissenblatt for relaying stuff from the show floor.

Podcast Movement will be back next year, from August 23-26, and I’m making every possible effort to be there in person.