Hands-free punch-and-roll with Adobe Audition on a Mac

A guide on implementing a much-used voice recording technique in Adobe Audition.

Punch-and-roll is a technique voice actors use when recording on their own setups, to easily manage those moments when you fluff a line. When you hit a stumbling block, you hit a button, spool the track back a few seconds, let it play and then resume recording over the bit you want to discard.

The technique is native to some recording software, but sadly not Adobe Audition, which is the software I’ve used for the past 16 years or so. There are guides for how to achieve the effect on a PC, but on a Mac it’s a little more complex.

To compound the issue further, I wanted to be able to do this hands-free, via a foot pedal. That way I can hold the iPad or Kindle comfortably - there’s no room for a stand in my broom closet of a recording studio - and save time by stamping rather than taking my hands off the device, finding the right keys, then silently getting my hand back on the device in time for the roll forwards.

I should mention that the system I’m outlining is a poor excuse for proper punch-and-roll, as some software that supports it natively will actually preserve both ends of the recording, so you can manage the cross-fade between the mistake and the retake. However, at least with this technique, I use markers in my audio so I can visually see where things need cleaning up. Also, I’m only working on a single track, whereas if I were to work in a session, I’d be able to work out something less destructive. But this is an early-stage approach.

“Keyboard wedge” is an old term for a piece of hardware that behaves like a keyboard. Barcode scanners are keyboard wedges; they read a barcode then mimic the typing of the code into the computer. A simple USB foot pedal - or switch - should map to keys on a standard keyboard. The one I bought, and linked above maps the three buttons to the A, B and C keys, but crucially the Mac - and the USB Overdrive software - are able to distinguish between the button on the pedal and the keypresses they’re mimicking. That’s important because I don’t want my script to run every time I hit a common letter on my keyboard!

USB Overdrive is software that lives in your System Preferences and maps hardware buttons - like gamepads and other controllers - to keystrokes, system events and other such things. Without the software, if I hit the left-hand button of the foot pedal, a letter A would be typed. With the software however, I can map the foot pedal’s buttons to system events like applications, other keystrokes or scripts (and it’s the latter that we want).

Those scripts in detail

There are a few attempts at the solution above, which I used for a bit of base knowledge, but none of them quite works. Maybe it’s because the operating system has moved on since then, or Adobe changed their keyboard shortcuts. Either way, for now the stuff above is accurate.

Hitting this button will pause recording, spool the audio back 5 seconds, then play them. It does this by performing the keyboard shortcuts you’d use to do the same in Audition (Space to pause, J to reverse, K to go forwards and space to resume playing).

This mimics the pressing of the M key which creates a marker in your audio, so you can see where you’ve punched in for editing later (this is important, as there’s probably a bit of residual noise from the press of the pedal that you might want to remove). It then de-selects the part of the waveform it had selected (this is important because without this step, it’d stop recording after a couple of seconds because it only records over the mistake; it doesn’t continue on). It then resumes recording by performing the Shift+Space keyboard shortcut.

Whenever I need to pause and resume, I can just hit the middle button, but it’s important to remember not to hit this button while Audition is reversing, as you’ll confuse the app (remember this is a hack, and Audition doesn’t know what you’re trying to do, so it’ll probably end up selecting a bit of the audio you didn’t want, and then stop recording). Always make sure the audio is playing normally before you hit the middle button (you can always hit the left button again if you want to go further back).

In Audition I just added C as another keyboard shortcut, so that it does the same thing as the M key (creates a marker in the audio). This is handy for marking chapters.

This is still slightly experimental at this point, but it’s already gone through a number of refinement steps. I’m hoping it’ll help until such time as Adobe decide to give some love to Audition again. Do try it yourself and if you have questions, find me on Twitter. 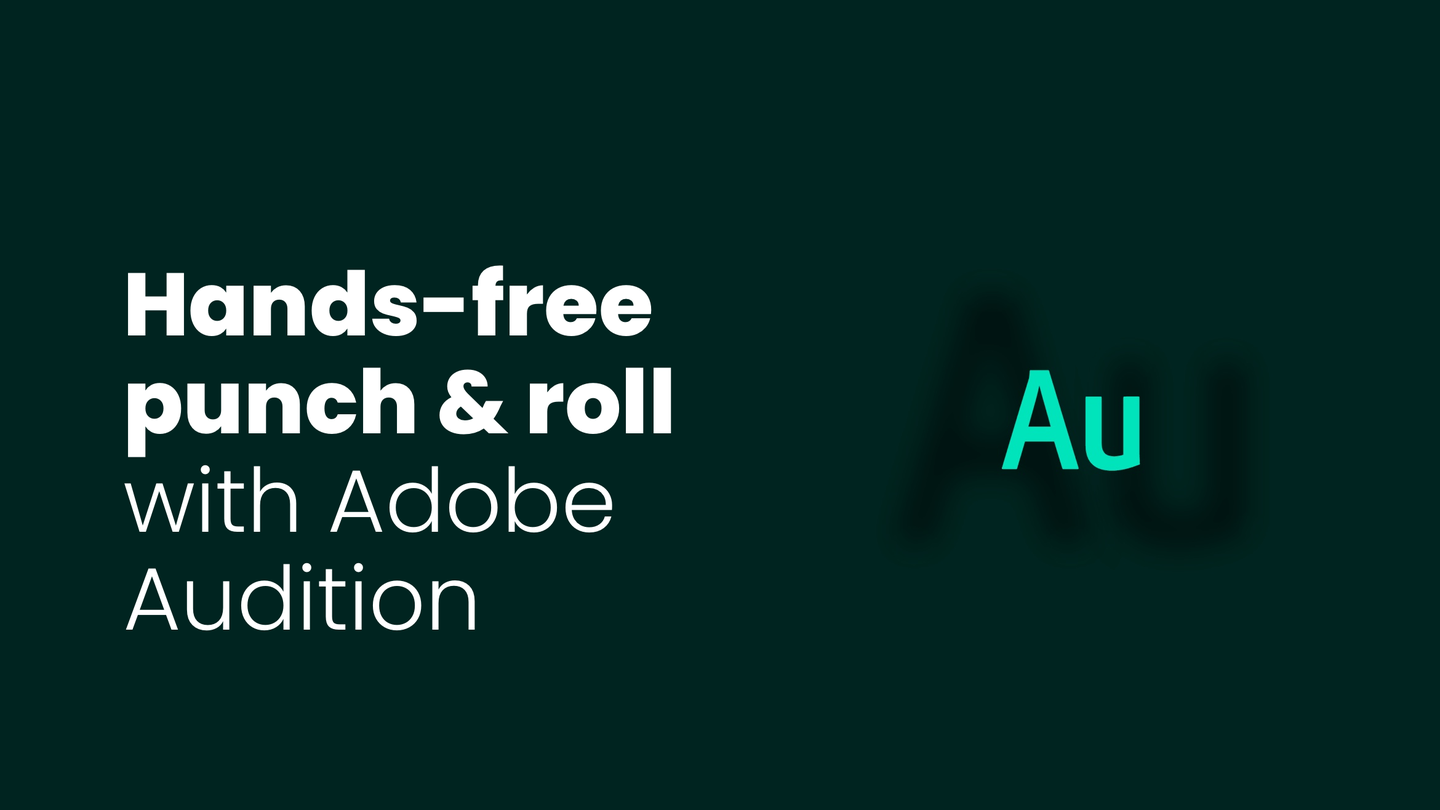