How to record your voice

Mics, headphones, boom arms, sound baffling? Let's simplify it, and cover the tech and technique you need to record your first piece of audio. 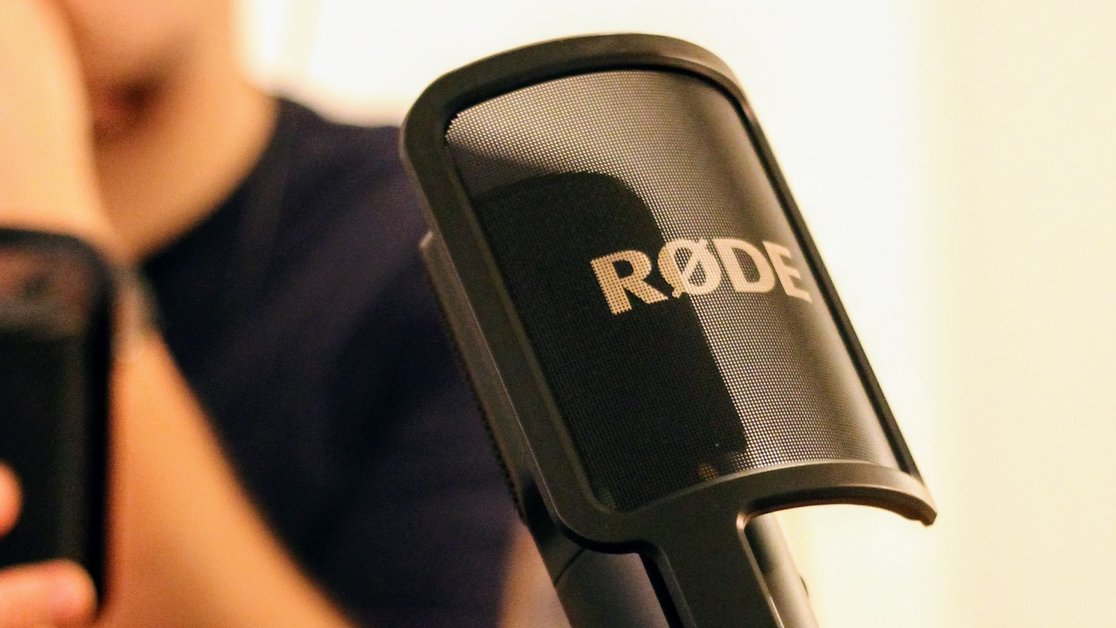 Whether you’re editing audio yourself or handing it on to someone else to edit, you’ll probably need to record your own voice. The good news is that all it takes is a microphone, a pair of headphones, and a bit of software.

There are two types of mics: condenser and dynamic.

Signal is the sound we want to record; noise is the stuff we want to get rid of, but comes along for the ride. Noise might come from your computer’s fan or be electrical in nature. Mobile phones can interfere with your recording and create noise (Although they’re better at this now).

Some dynamic mics are “gain hungry” in that the equipment you use (typically called a pre-amp) needs to boost the signal coming from the mic.

We need to convert our analogue voices into a digital signal for our computer to record. We typically connect a mic to a computer using an XLR cable and a USB audio interface, or by plugging in a USB mic directly into our computer.

The gear you need

Depending on how adventurous you’re feeling, you can opt for the XLR setup, which gives you greater flexibility in mic choice, or the simple route (which won’t reduce your audio quality).

If you want to go XLR, consider these:

If you just want to keep things simple, the Røde NT-USB is the mic to go with.

Regardless of your mic choice, you always need a pop filter or shield: a piece of cloth or foam either fitted over the microphone head, or attached to a stand or arm. The Røde NT-USB comes with a built-in pop filter, whereas most professional or prosumer mics don’t, so you need to add one to your shopping list (they’re only a couple of bucks, it doesn’t matter which one you get, and they make all the difference in trapping the air that escapes when you make popping P sounds [we call these plosives]).

If, later down the line you want to record more people in person, you’ll need to invest in XLR mics and a mixer, but we’ll cross that bridge when we come to it.

Find the mic that’s right for you

You might like the sound of one mic over another. Maybe your voice sounds tinnier in a condenser mic, or too muffled with the dynamic mic you’re using. As you progress along your podcasting path, you’ll settle on the mic that fits your voice exactly, but if you’re in doubt, stick with a condenser mic.

Again, USB mics help keep things simple, but it’s worth spending more than the price of a Blu-Ray on them. Most USB mics don’t require any drivers. Cheaper ones will be labeled something like “USB audio codec” whereas mics like the Røde show up with their model number.

Dynamic mics have high noise rejection, which means you don’t have to move far away for your voice to become inaudibly quiet. Condenser mics pick up more of the room around them, so you’ll still be clear as you back off the mic, but you’ll hear more reverb (the effect of sound waves bouncing off hard surfaces).

Reverb is much more noticeable in recorded audio, since our brain doesn’t edit out this information as it would if we were speaking to someone in person.

So, start by getting as close to the mic as you can, then put up your first in-between you and the mic. A good rule-of-thumb (or fist) is to maintain that distance from the mic. You can also try putting up your hand in a karate-chop pose, lining up three fingers between you and the mic, and using that to judge the distance.

The closer you are to the mic, the warmer the sound, and the more pleasant the experience for the listener, allowing them to become more immersed in your words.

Most microphones have a logo on the front. That’s the direction you need to speak into. Some mics like the Røde Procaster are top-address mics, meaning you speak into the top of the microphone head, but most mics are side-address, so you speak into the biggest side, where the logo is. In the case of the Røde NT-USB, you have a huge pop filter to address.

If you’re finding your Ps popping unpleasantly, tilt your head ever-so-slightly away from the mic so you’re not dead-centre. That’ll help deflect a little of the wind.

If your mic is on a desk and you’re having difficulty getting close enough, prop it up on some books. They don’t even have to be good ones. You can also buy a boom arm that will clamp to your desk, but you might have to take various elements of your USB mic apart in order to fit it, so this approach is best used with XLR mics, or USB mics that don’t have any integrated pop filters or stands.

Again, keep your headphones on to monitor your audio levels. If you’re about to shout or laugh, if you can think to do so beforehand, tilt your head away from the mic; otherwise you’ll end up with a horrid, distorted blob of noise. Of course we want to capture the sound of laughter; we just don’t need it to sound too aggressive for our listeners.

You can further reduce reverb and create a warm space for your audio through sound dampening (or baffling). You can buy acoustic foam, but the simplest way to achieve this is to surround yourself with soft furnishings: curtains, bedding, clothing… or build a pillow fort.

Soft fabrics absorb sound and help prevent it from bouncing back into the mic. Professional podcasters recording on-the-road have been known to sit in broom cupboards or under duvets. If you’re not on camera, no-one will know how you look. Just make sure it’s not too hot in there.

A DAW is a piece of software used to edit your audio. You can use it to record your voice too, but sometimes it’s simpler to use a dedicated app, and import your audio into it later.

We use the WAV or AIFF formats because they’re lossless, meaning they’re not compressed. Your finished podcast audio will be a compressed MP3 file, and it will sound its best if you or your editor is working with raw materials at their highest quality (otherwise you end up with strange audio artefacts that result from audio that’s been “stepped on” multiple times).

Going for a take

If you’re new or relatively inexperienced in recording audio, you’ll be grateful to your future self if you do a test recording each time you come to make an episode. This will help you make sure everything sounds consistent, and of a high quality.

Before you start, get yourself comfortable and relaxed, put on your headphones, make sure your mic and recording app settings are correct, then record a bit of sample audio. If you’re working from a script, read a bit of the script aloud in the same tone and at the same energy level you would if you were doing it for real.

It can be easy to be a little quieter in the test recording, so try and make sure to match the energy you’ll use when recording the real thing, or even go a little bigger to give yourself some headroom.

Then, hit Record, and you’re ready to go.