What is Podcasting 2.0, and why is it important? 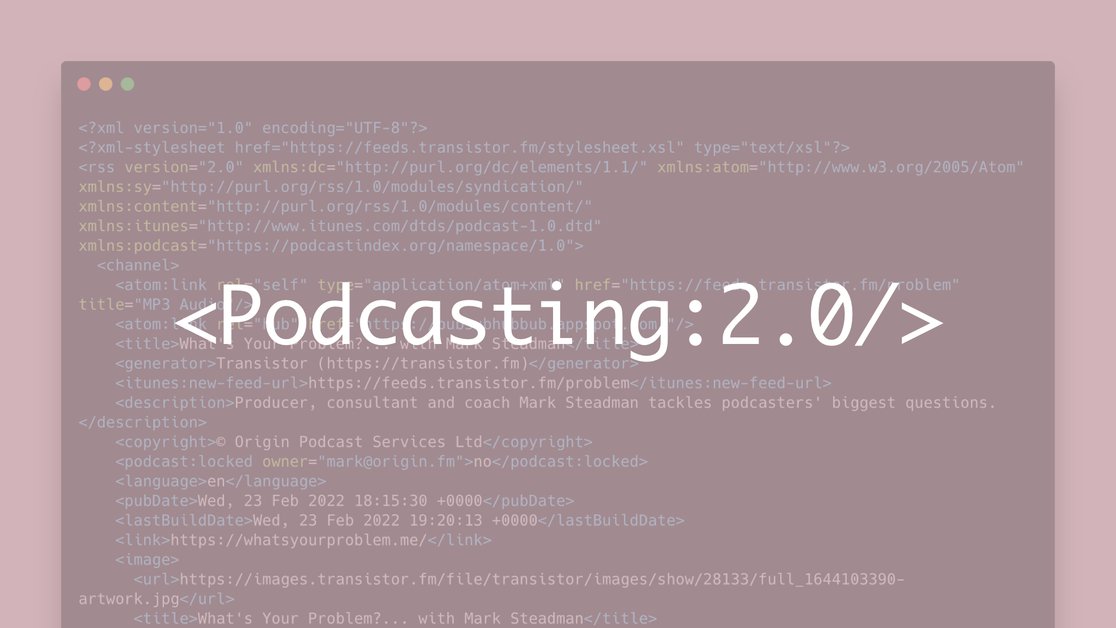 Podcasting runs on tech that allows anyone to publish a feed of content and attach an MP3 file to it. In 2005, Apple took over a small directory of podcast feeds and added it to iTunes. This let people sync new podcast episodes to their iPods. While Apple is still the foremost directory of all podcasts, you can have a podcast and not be listed with Apple… or anyone. There are now more directories operated by the likes of Spotify and Amazon.

Apple doesn’t exercise a lot of editorial control over their directory. But in 2018 they removed Alex Jones’s content because it constituted hate speech. They weren’t the only ones, but as stewards of podcasting’s de facto Yellow Pages, some saw their actions as an overreach.

Whether you or agree with them or not, Apple censored someone’s voice. They decided what was acceptable speech and what was not. This effectively removed Alex Jones’s show from several podcast apps across iOS and Android. That’s because those apps use Apple’s directory to help users find new shows. 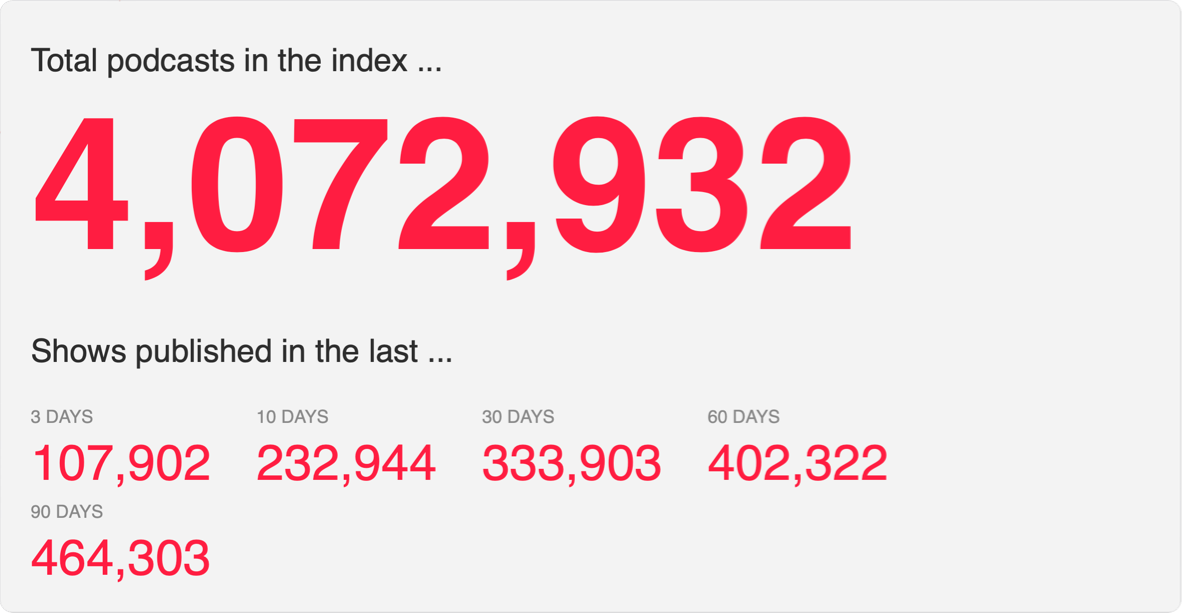 In 2020, Adam Curry launched the Podcasting 2.0 project. It was made up of two important pieces: the podcast namespace and the Podcast Index. We’ll get to the namespace – and what that means – shortly.

Curry co-authored the tech that allows podcasting to exist, so he knows what he’s talking about. On his Podcasting 2.0 podcast, along with collaborator Dave Jones, he embarked on a mission to “preserve podcasting as a platform for free speech”.

The Podcast Index is an open directory of podcasts that anyone can submit to, and that any app can search. Their hope is that app developers will use the Index instead of Apple’s more opinionated database. App developers can still choose not to show certain content, but that doesn’t remove it from the Index.

Your media host might be able to help you list with the Podcast Index automatically. If not, you can submit a show yourself. A growing number of apps use the Index for search, but nothing mainstream yet. So, why is this movement important? 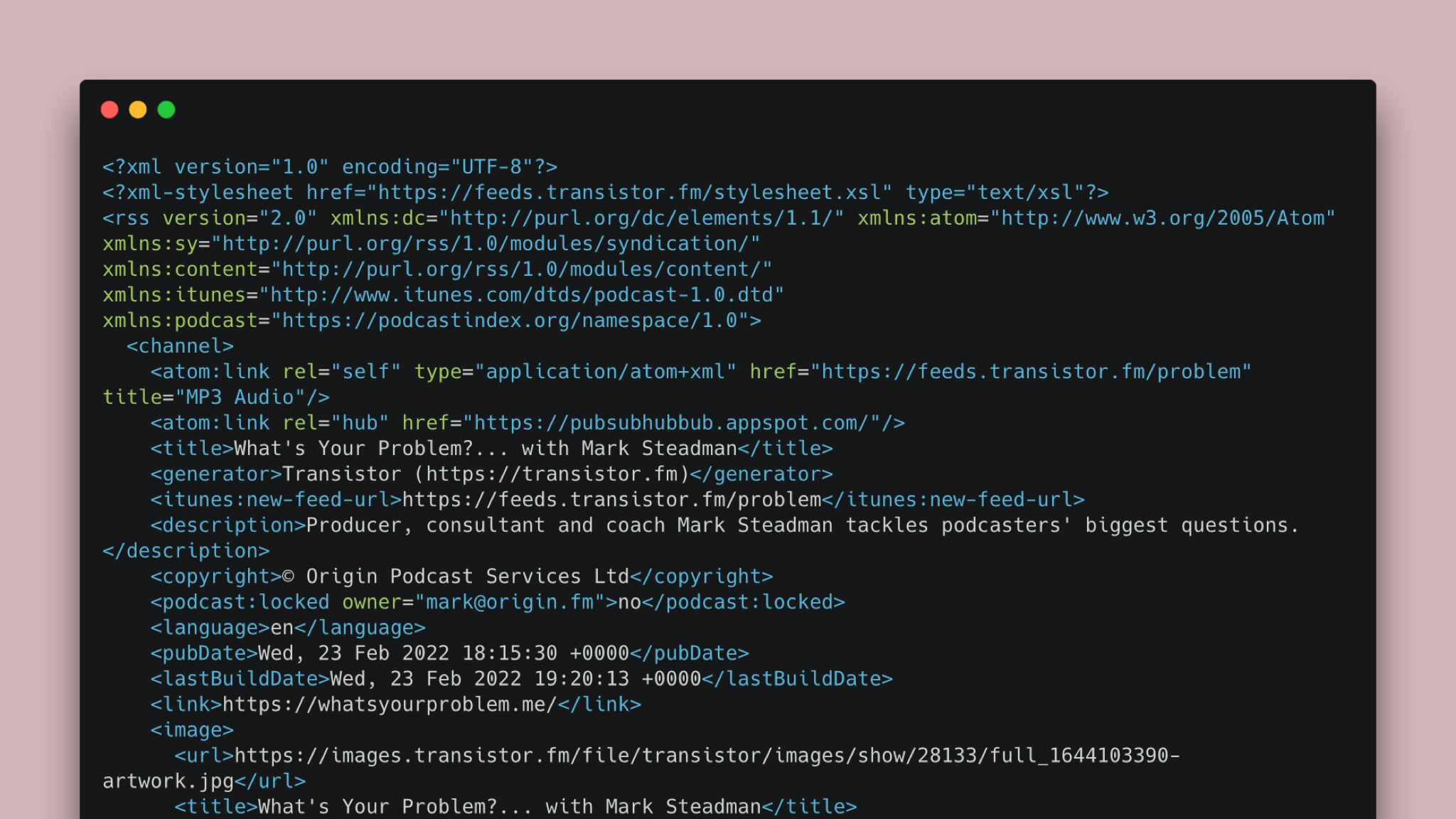 Here’s where things get a little technical. Podcast feeds are documents that point to episodes of a show. If you’ve ever had to type HTML into a box (like using <b> tags to make something bold), you’ll know the format.

Computers can read the tags in podcast feeds to get info about the show, or each episode. Just like an <a href=""> tag makes text into a link, an <enclosure> tag points to a piece of podcast media (your episode’s MP3).

A set of tags is agreed upon by a number of parties: those who came up with the idea, and those that will use the information. We group tags together into something called a namespace.

Your podcast feed document is made up of a bunch of these tags, and your media host lets you edit them using their interface. When you set the title, description, or artwork for your podcast, your media host updates your feed for you.

Apple created their own standard set of tags for things like artwork and genre. Over time, other companies have added their own, but everyone ignores them and just uses Apple’s.

Towards the end of 2020, media hosts and app developers started adopting some new tags from the namespace. Here’s a quick rundown of the most relevant ones to date:

Let’s look at these in a bit more detail.

You don’t need to have experienced hearing loss to find transcripts useful. Some listeners find it hard to understand two people talking at the same time. Others might not be native English speakers and may struggle with a strong accent.

They also help computers better understand and index your work. The more they understand about the discussions you’re having, the more they can surface them to potential listeners.

Attitudes to transcripts are still evolving. Google, Spotify, and Amazon transcribe shows themselves and ignore the transcripts podcasters provide. Hopefully these bigger apps will adopt the standard rather than rely only on AI transcription. If you’ve ever read YouTube’s automated subtitles on a video, you’ll understand why.

This tag points to a way listeners can donate to a podcast. This could be a Patreon, Buy Me a Coffee, or even an Amazon affiliate link.

A few years ago, Overcast added a $-sign button to relevant podcasts. RadioPublic also experimented with something similar, but neither took off. There’s little support for this new tag across popular apps and media hosts, but it’s a good idea. It’s also the easiest to put in place for app developers, as it’s just a link to a website.

There may be some reluctance to adding it to iOS apps, since Apple levies a 30% tax on any digital goods bought on their devices.

You might hear people talk about “value for value” within Podcasting 2.0 circles, sometimes written as “value4value”. This was a term Adam Curry coined in the early days of the podcasting medium. It used to mean “if you find value in what we make, consider a donation”. However it’s now become the brand name for an approach to funding that relies on Bitcoin. The idea is that tiny fractions of Bitcoin are sent to you and your team as listeners play through your show.

This might be worth revisiting once crypto’s impact on the environment is offset by the value it adds to the world. My hope is that responsible crypto meets wide-scale adoption, so there are fewer hoops for listeners to jump through. But right now it’s too complicated.

This is a way for podcasters to credit or mention people involved in the making of a podcast, or an individual episode. The person could be a guest or a crew member. The information in the feed can then be used to build an IMDb of podcasting, or let fans follow a guest from one podcast appearance to another.

A startup called Podchaser tried this a while back, but found their database spammed with bogus names. This is why we can’t have nice things.

The state of Podcasting 2.0

These are three great initiatives, but they need buy-in from media hosts and app developers. Hosts are often quicker off the mark, as some of the features are easy to add. They also provide an edge in a competitive market.

The sticking point is with apps. As I see it:

That leaves the ecosystem of indie app developers, like Overcast, Podcast Addict and the like. However these apps tend to cater for super-listeners, rather than the mass market.

So why bring it up?

Podcasting 2.0 has a chance for a real shot at creating more widely-adopted standards. And by “adopted” I don’t just mean used by media hosts, but by major apps. I’ll go into why I think they’re not there yet, in a second.

There’s lots more to Podcasting 2.0 than I can cover here. Those who know the space know that I’ve missed and/or simplified a great deal. But my aim is to help leaders and changemakers like you understand what’s possible.

The more we press our media hosts to add features like transcripts, the more we open our work up. The more feedback we file with app developers, the higher they’ll prioritise adding them. Podcasting is no longer the preserve of the nerdy. It’s continuing to open up, so we need to make our voices heard, and represent our listeners.

I’m fairly certain most people who have podcasts have never heard of Podcasting 2.0 or this “namespace” thing. The reason for that may lie in psychology.

Podcasting was born in an era where Internet subcultures were flourishing. “Podcaster” became an identity, and podcasting became something to protect and preserve. Some of that is basic primate stuff: we’re loyal to the in-group and distrust the out-group. I’ve perpetuated it myself, but now I try to look for the moments when that attitude serves us, and when it doesn’t.

Most of us are multi-hyphenates. We’re not one thing. We wear many hats. Especially those of us who run businesses or use content creation to affect change. I love working with people like this, who want to make great podcasts. These people don’t identify with the Podcaster subculture, and what’s more, they are the majority.

Podcasters have seen a lot of upheaval and are still dealing with the influx of new, big-name, big-budget content. I don’t blame them for wanting to keep something just for them. But there’s plenty of space to go around. Podcasting is mainstream now, and the Podcast Index – along with the podcast namespace – has an opportunity to embrace the change.

They’re making great innovative strides. I’ve made my own contributions to the standards, and I’m totally behind them. I have my reservations on crypto, but there’s a community of geniuses doing great work. And they don’t all think alike, of course.

I’ll continue to keep you posted on the improvements and evolution happening within the industry that serve us. The more we can hear from and work with each-other, the better we can serve our audiences. Nearly two decades on, podcasting is still in its infancy. There’s plenty more time for us all to get on the same page.