A look at the data gathered by the radio industry analytics body, and what it means for podcasts 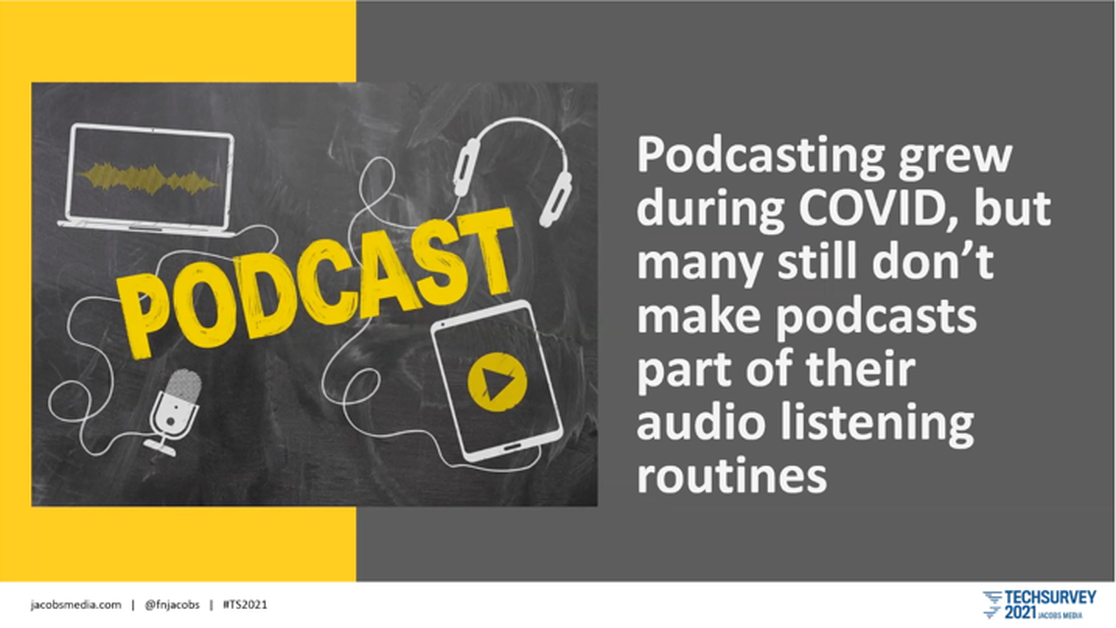 Radio research and strategic consultants Jacobs Media came out with their latest TechSurvey results this week, and while their findings were mainly around AM and FM radio and how podcasting is “eroding” radio listenership, there were some useful numbers we can use when thinking about how our work fits in with the wider podcasting ecosystem.

Usual caveats for these sorts of things apply: it’s a self-reported survey taken up by people inclined to take up these sorts of surveys, specifically in the States. But their sample sizes are quite large and they’ve been doing this sort of thing for a while, so I think they’re useful in giving us a sense of the landscape.

You can watch the webinar in which they walk through the findings for free.

Listening is still taking place largely in the home, but what I found interesting is that only 4% listen in the car and that number hasn’t changed in the last four years. I guess it makes sense. If you’re driving, do you want your attention split between the road and someone selling you a VPN?

The state of ads

35% of survey participants say they’d rather hear host-read ads than those injected from marketplaces. Apparently 11% would rather hear the opposite, which is a surprisingly high number for something that goes against received wisdom.

The rest of the group – the majority – basically don’t know or care, which is something to keep in mind if you’re making a monetisation decision. Of course, every show and every audience is different, and while I would never recommend switching from host-read – either baked in or dynamic – to dynamically-inserted marketplace ads, any distaste some of us may have towards them could just be a byproduct of being in the industry.

Since the last survey, 10% more said they would prefer host-read ads, and the younger you are, the more likely you are to want them to be host-read. Pure speculation on my part here, but I wonder if that’s to do with millennials and zoomers feeling more closely connected to the people they listen to… call them “influencers” if you must.

Now for the tricky bit, if you’re relying on ads to bring in revenue. 51% of participants say they skip most or all of the ads. 13% don’t listen to podcasts with ads, and the rest rarely or never skip. I don’t have more detail on the kinds of ads that are skipped, or whether people are skipping ads they’ve already heard, but I wouldn’t be surprised to learn that people are most-often skipping the ads they’ve heard a million times before… after all, there’s only so many “personal anecdotes” you can hear about buying a suit for a wedding. I’m looking at you, Lex Friedman. 😉

There’s a bunch of noise being made about podcast privacy at the moment. I think a lot of it is just people churning up the waters looking for something to garner clicks, so take any long rants about “listener privacy” with a pinch of salt… keeping people’s listening habits private is important, as is being able to opt in to tracking as opposed to opting out, but let’s not lose our heads people. (I’m mainly casting a side-eye over to m’learned friends across the pond, in Perth and Texas.)

Anyway, 47% of survey participants are concerned about personal data use by tech companies (mostly boomers, but it goes down the younger you get). It’s a significant number, and there may be more to shake out in the coming months as “big tech” is examined ever more closely.

This survey is biased towards radio and a little against podcasting, which it sees as taking listeners away, but the outlook for podcasting is positive. The key takeaway for me is the near-half of the US population that doesn’t listen to podcasts – we don’t have to convert them to podcast listeners, we just have to get them to listen to our work, and social media’s increasing – and overdue – love affair with audio is, in my humble opinion, going to help a great deal.