How to make a podcast intro

The first 30 seconds of your latest episode are your one chance to make a good impression. Lots of podcasters squander that opportunity with boring, over-long intros. But making a compelling intro is easier than you think. 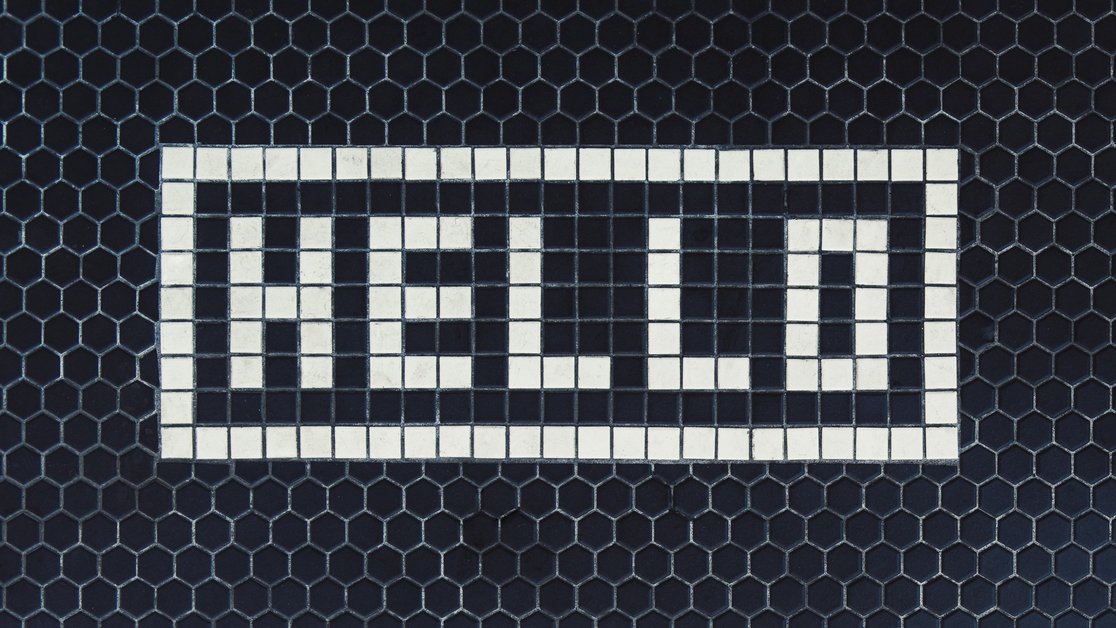 There is a lot of bad advice and worse examples when it comes to podcast intros. The result is usually the same across the board: uninspiring, repetitive, and inauthentic.

Podcast listeners come to your show for one of two reasons: to spend time with you, or to take away an idea. For a new listener, your intro is a way to show them the best version of you, not a version that you can’t maintain.

Podcasters, especially entrepreneurs, often have a slick, professional-sounding intro. This then sets an expectation that’s dashed when the host comes in with their laptop mic.

There are tools on the web for putting episodes together like building blocks. This can create a couple of problems:

Here are some common mistakes podcasters make with their pre-recorded intros:

Starting each episode in the same way is no bad thing. It can be comforting to listeners to know everything is in its right place. Overdo it and you can lull them to sleep, so try ditching the reusable intro, and record a new one for each episode.

That doesn’t mean writing a new script each time, but it does give you the chance to tweak it as you go. A short, tight sentence that explains the premise is way better than a 90-second life-story.

At the very least, a new listener will see the artwork or read your show name, so will have a vague idea of what’s on offer. If your podcast name doesn’t give that away – eg “The Jo Bloggs Show” – then it’s time to pick a better name.

Try not to spend too much time explaining the show – it makes binge-listening more repetitive. One short sentence should do it.

Here’s a made-up example to show lots of the common mistakes people make. It’s not fair to call out specific examples, so here’s a reconstruction. If your intro has elements that sound like this, they’re easy to fix.

What did you spot in this intro? Things to look out for are:

How can we improve our intro?

If your podcast is interview-based, a great way to start is with what the TV calls a “cold open”. In podcasting, this is a short snippet of audio that creates tension we can resolve later in the episode. You can take a piece from the conversation that never made it to air – as long as the guest was happy for this to be used. Maybe your guest had a funny comment or quip that sounds weird out-of-context. Maybe there’s a common belief people have that your episode is going to subvert.

Here’s an example from a show that’s currently on hiatus:

In this example, the show description is based on a script, but it’s never delivered exactly the same way each time. This makes the show more bingeable, because the intros are less repetitive.

After the intro, the next voice you hear is that of the guest. This is an old radio journalism trick, and works wonders to help you sound professional without being over-slick. Instead of starting the interview with the pleasantries, tee it up in your intro. Set out the first question as part of a statement, and then let the interviewee take the reins. For example:

“This week’s guest is Sith Lord Darth Vader. He’d just got back from lunch, so we got into talking about food and I asked him what snacks they had in the vending machines on the Death Star.”

If you want to stick with an intro you record once and re-use, keep it brief and explain the premise of the show quickly. The main body of the episode should pick up right where the intro left off, and start with something unique to that episode. You’ve already welcomed the listener, so no need to do it again. Start with “this week’s guest is” for example, or “on this episode I wanted to talk about”.

This example takes the cold-open from the blog post summary. The music loops underneath so the opener and the intro feel like one piece. The main body of the episode is taken from the video above, but without the “Welcome to Podcode” spiel (Podcode was my old podcasting blog and video channel).

Also, the music overlaps very slightly with the main body of the episode. This isn’t hard to do as long as you’re using a real podcast editor, rather than a site where you assemble your episode like Lego blocks.

A little bit of effort signals to a listener that they’re important to you, and that their time and attention is valuable. Episodes that feel like they’re factory-produced are less likely to connect with a listener on a level that builds trust.

Of course, you might listen to podcasts that have intros that make the “mistakes” listed above. They might be wildly successful, and so worth imitating. But if you do that, you won’t stand out.

If introducing your own show makes you feel uncomfortable, that’s completely understandable… it’s a weird thing to do. But, rather than hire a voice actor to bring you on-stage, invite a friend over and record your intro to them. You can even do this over Zoom. Setup your recording equipment as normal – they don’t need a mic or headphones – and look at your friend in the same way you would if you were having a chat. If you feel silly doing it, or the words start to feel too formal, that’s a good signal for you to loosen up a bit.

If you want your intro to sound professional but you don’t have a good mic at home, instead of scheduling time at a recording studio, get a Samson Q2U. It’s an inexpensive mic that plugs directly into your computer. Get about a fist’s distance away from it and you’ll be amazed how good you sound.

Remember, your job is not to sound perfect or polished – it’s to sound human. By all means, do your best and sound as good as you can, but don’t try to be too slick about it.

Hook your listener in as early as possible. Create tension with a cold-open clip that you can release later in the episode.

Whatever music you pick, don’t play it safe. If you’re not a little bit excited by the music you pick, or it feels like “this is what a professional podcast sounds like”, ditch it and move on. 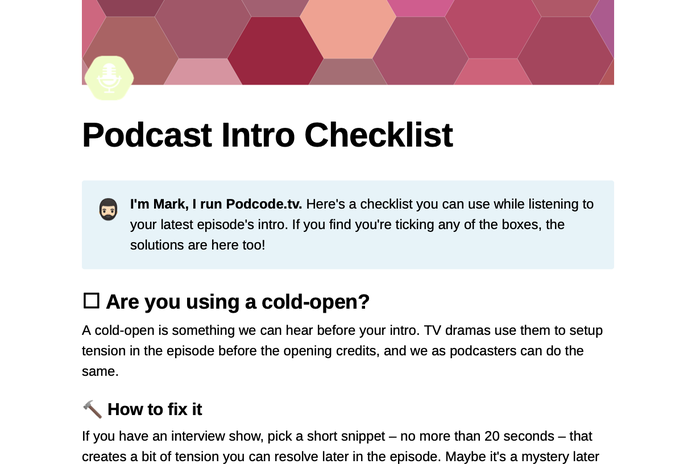 Have you checked your podcast intro lately? Here’s a handy checklist to help you assess whether it could be shorter, or if you’re using music in the best way.