Since you ask me for a review of a radio programme... 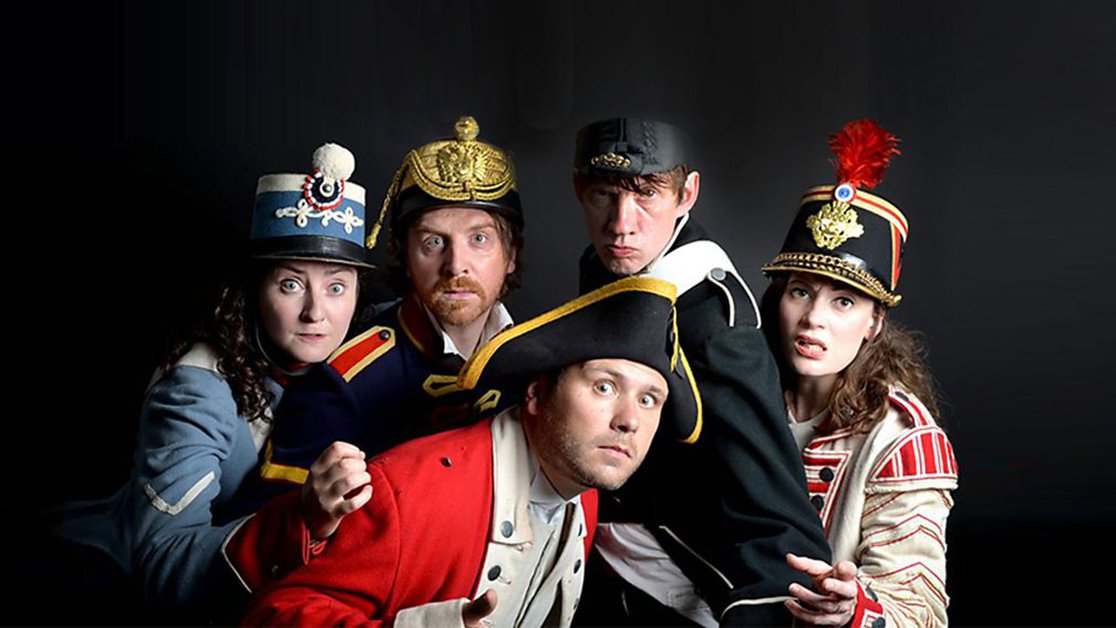 Last Thursday saw the culmination of what I can best describe as a “radio event”. At its simplest level, it was simply a series of radio shows broadcast over six weeks, but series 9 of John Finnemore’s Souvenir Programme is so, so much more.

British radio has a rich history of producing great speech content, thanks almost entirely to the BBC. And when I’m referring to speech radio, I’m not talking about talk radio, although the Beeb has plenty of that, along with commercial radio stations. What I’m talking about is a medium that seems to have all but died out in countries where podcasts are most popular: compelling drama, insightful documentaries, and epoch-defining comedy.

Name almost any British comedy property you like, and if it aired on BBC TV, it probably started out on Radio 4: Monty Python, Fry & Laurie, Alan Partridge, Whose Line is it Anyway?, Little Britain, Mitchell & Webb, the Mighty Boosh, even Flight of the Conchords cut their teeth to varying degrees on Radio 4.

Speaking of Mitchell & Webb, I remember watching David Mitchell’s Soapbox, a piece of short advotainment from 10+ years ago that was funded by a men’s cosmetics brand. I enjoyed them a great deal and made a note of the writer credited with capturing Mitchell’s voice at its ranty pettiest. When, a few years later I heard John Finnemore pop up on the Now Show, a long-running (and a bit tired) satirical sketch show with some very good guest spots, I started to pay more attention, then after hearing him interviewed on Richard Herring’s Leicester Square Theatre Podcast (RHLSTP!), I thought “OK, it’s about time I checked this guy’s work out properly”. That was 2015, and I’ve been an adoring fan ever since.

I won’t give you a potted history of his work as you can find it out for yourself, but I started with his sweet sitcom Cabin Pressure, which he wrote and performed in, before devouring his long-running sketch show, John Finnemore’s Souvenir Programme in which he was very much the lead. In between series I would also listen to Double Acts, an anthology series he wrote but in which he played only occasional or smaller parts.

JFSP has been hilarious and holds up to repeat listens, as the writing, performances, and total disregard for the fourth wall still manage to be surprising, even three or four replays in. But this latest series has been something of a departure, and that’s what I want to talk about.

JFSP is a sketch show. Sometimes the sketches are connected, but only occasionally is there more than a passing link between one sketch and another. There are a couple of recurring characters (Patsy Straightwoman, “all feed lines, all the time”) and “the old club bore” played by Finnemore himself, who tells longwinded, fantastical and often pun-filled stories to anyone who’ll listen, and then regret asking. You know he’s about to embark on a story when he utters the phrase “Well, since you ask me…”.

Up until this most recent series, and if I remember rightly, the character had no first name, but the surname Finnemore. OK, now you’re up-to-date.

If I had one complaint about series nine of JFSP, it’s the name. There might be an important commissioning reason as to why it was called that, it might just be because it was the same cast who’ve performed in the last seven seasons (one of them joined in series two). It doesn’t matter all that much, but for someone who was a fan – although not necessarily one who’d read up on the development of the latest series – it gave me mismatched expectations.

What I was expecting was another gently funny series of sketches, with nods and winks to life in a pandemic, some fun fourth-wall-breaking stuff about having to perform without an audience, and some monologues about Zoom. What I got was a world already pre-built and populated with a rich history, and a cast of interconnected characters. Not a sketch show, and not particularly timely, but timeless and almost impossibly lovely. I was expecting some jaunty rock-and-roll ditties, and instead I got a concept album. I thought I was getting Beatles for Sale, and instead I got Sgt Pepper’s.

The only bit of continuity between the last series and this one, apart from the cast and the musicians, was the old club bore, who in this incarnation is called Newt (or Uncle Newt) and who is wonderfully sweet and generous. (Actually I think it’s fair to say he’s a different character entirely, he just happens to use that opening line occasionally.) The format is nominally the same: sketches performed by a talented cast, but this time, every sketch connected to a wider story, which was told each episode through the eyes of a different family member, and in reverse, from 2021 to 1899.

So what does this have to do with podcasting?

I think there’s a lot we can learn about how to make a great fiction podcast, by looking at the constraints the JFSP cast faced in 2021.

Normally the show is recorded in front of an audience, as are some of the most iconic Radio 4 series, but this last series wasn’t, so it felt much more like Double Acts, especially with Finnemore introducing each scene with a year and location. If I’m being picky, the remote recording was evident in a few places, and in some performances more than others. I might be completely wrong, but it felt like some of it was recorded in isolation, with each person just doing their bit and the piece being woven together, but either way, a keen listener could tell it wasn’t recorded in person.

I wanted to bring this up because that’s a constraint many of us face, and have to navigate. Producers of podcast fiction have got good at faking in-person audio, and it’s a learnable skill, not magic, so it’s worth mentioning in case you ever saw this as a barrier. Get someone to give you good quality dry audio recorded in a deadened room, and you can build a world around them.

We can sometimes be known to fret about what audio should belong on what feed: “This season is going to be a departure from the last one; should it be on a different feed?” “I want to do some episodes solo but some will be interviews. Should they be on separate feeds?”

Series nine of JFSP shows that this really doesn’t matter. As I’ve said, although the cast is the same and the music is familiar, very little of the previous series is evident. Yes it could have had a different name, but apart from a mismatch of expectations upfront – which is eminently solvable – it clearly hasn’t damaged the show.

I’ve also seen far more writing on the topic of this series than I have on any podcast I can think of in the last few years. And if you’re thinking “well they’re the BBC, they’ve got a massive audience”, that’s true to a degree, but I would venture some of the fiction, narrative, and comedy podcasts I follow have far larger audiences. I won’t count the live radio broadcast as there’s no guarantee of active listening, whereas those listening via BBC Sounds will, I can be confident, be listening much more attentively, which is what matters.

The amount of fan contributions (people picking apart the story told throughout the series and putting it together in different orders, or just retelling the story in Wikipedia form), are testament to what an adoring fan-base can do. Sketches from previous series would wind up on YouTube and might be referenced on social media, but in series nine, Finnemore created a universe, and people wanted to be a part of it, in some small way. Me included.

I’ve not made it clear so far, but I’ll be explicit and say that JFSP is not a podcast, and has never been available in podcast form. If you’re not catching it live, the only place you’ll be able to hear it is the BBC Sounds app, or by buying the audiobook. And that audiobook will sell.

I’ve bought all of Finnemore’s radio work through Audible subscription. And if we imagine for a moment that JFSP is a podcast, it would not be the first to transition from RSS to audiobook. Just because you open your work up to a podcast audience doesn’t mean it should remain that way forever. I will always champion an open ecosystem over a closed one (RSS and downloadable MP3s vs DRM-locked audiobook files in weird formats), but that doesn’t mean you shouldn’t make money from it. You might also find that for some, they just prefer that format, and don’t mind paying $5, $10, even $20 for the convenience.

Finnemore has also been active on social media, engaging with people who’ve written about his work, and I’ve yet to see anything taken down citing copyright infringement (someone prominent I won’t link to has even chopped up the series and is hosting the individual scenes as downloadable MP3s, which is highly illegal). I think we as podcasters are pretty good at communicating with our audiences, but it’s nice to see tweets that add colour and context to the work, rather than simple links to the next episode or pleas for reviews. The cast has also been active on Twitter, and John will highlight and tag certain performers who play particularly important roles in episodes.

Ultimately there’s nothing stopping a small group of podcasters – or one highly ambitious one with a good circle of talented friends – from pulling something like this off. (I’m not suggesting this hasn’t already happened, obviously, just making the point). At the centre of all of it is the writing and the concept. Nail that and you’re halfway there. If you can coax decent performances out of your cast, treat the audio so it sounds natural, don’t overdo the sound effects, pop in a bit of music and trust the listener, you can make something that can warm people’s hearts just as much as this show has. Nothing about it is outside our reach, as creative people, as long as you’ve got a good idea, a bit of patience, and a skill for putting one word in front of the other… or you know someone with that skill.

With projects like this, I think the biggest hurdle we face is that we don’t have a bar to limber up to. Podcasting’s so-called “low barrier to entry” has its perks and its pitfalls. While Finnemore already had a deserved foot-in-the-door to make a series of six episodes that were a massive departure from what an audience and commissioner might have expected, he still had to make it good enough to air; he still had to get it past his cast and the producer. British comedy has a long tradition of work done in solitude or in pairs. Very few British comedies are written by committee, so in that respect, there’s an overlap with our medium, but again the important factor is editorial.

So if there’s anything podcasting can learn from JFSP, it’s that we need to collaborate with people who will push us to make better stuff, to tweak that punchline or figure out a way for the audience to connect with a character in an opening scene. I’d love us to find ways to work together in groups, with the goal of making our stuff as good as it can be, whether it’s fiction, non-fiction, or pure banter. In a medium where “yes” is the default, because all it takes is a microphone and a mouse, sometimes a little bit of “not yet, but what if?” can be the fuel it takes to make something remarkable.